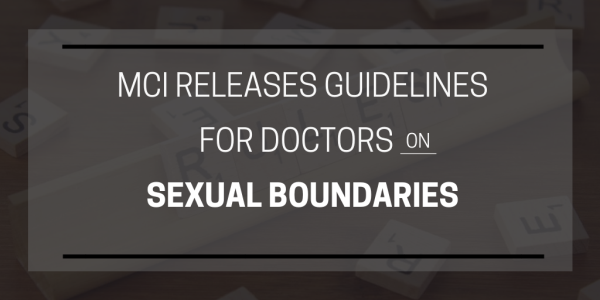 Medical Council of India (MCI) has recently released a series of guidelines for doctors on sexual boundaries. It was first drafted by The Bangalore Declaration Group and was pulished by The Indian Psychiatric Society (IPS) with a view that IPS will hold all members to its ethical standard.

The guidelines are as follows:

1) It is the ethical duty of all doctors to ensure effective care for their patients. This would mean that their own conduct should in no way harm their patient. Sexual relationships between doctors and patients invariably harm both the patient and the doctor. Trust, which is central to an effective doctor patient relationship, is inevitably damaged. In view of the power gradient that invariably exists in the doctor patient relationship, the onus is on the doctor to ensure he or she does not enter into a romantic or sexual relationship with a patient.

2) While the laws relating to sexual abuse in India generally pertain to women, these Guidelines aim to be gender neutral and serve as a guide to a code of conduct on doctors of any gender, and to protect patients of all genders too.

3) Doctors should ensure that they do not exploit the doctor patient relationship for personal, social, business or sexual gain.

4) In view of the power gradient in the doctor patient relationship and possible transference issues, doctors are reminded that even ‘consensual’ sexual activity between patients and doctors irretrievably changes the therapeutic nature of the doctor patient dynamic. This would be detrimental to the patient (even from the viewpoint of interfering with good medical care). This would mean that even if it is the patient who attempts to initiate the sexual relationship, it would be against good medical practice for a doctor to enter into such a relationship. Besides, it can be said that consent in a power imbalanced relationship is not true consent. While in some situations it may not be considered as ‘illegal’, these Guidelines would still consider it as a Sexual Boundary Violation (SBV).

5) Any non-consensual sexual activity would amount to sexual abuse/ molestation/ rape and doctors would be answerable to the law of the land. (Indian Penal Code laws relate to rape, child sexual abuse, sexual molestation, adultery and sexual harassment in the workplace). Sexual activity with a person less than 18 years of age in India amounts to statutory rape (consent immaterial). The Indian Penal Code states that consent for a sexual relationship with a woman of ‘unsound mind’, is deemed invalid and amounts to rape. The Indian Criminal Law Amendment Act (2013), lists out details of what behaviour is tantamount to sexual harassment and stalking. Section 376C (d) states the punishment for anyone in a position of authority in a hospital, if they misuse their authority by having sexual contact with someone under their care.

6) It is obviously important for doctors to take a relevant sexual history and perform appropriate physical examination. This should be done sensitively and documented properly in the notes. If intimate examination is done, gloves should be used, a chaperone present and indication and findings documented in the notes. All this should be communicated properly to patients, to prevent any subsequent misunderstandings. The doctor should not touch a patient inappropriately in the guise of physical examination or sexual therapy, for own sexual gratification. Doctors need to be aware that sexual boundary violations (SBVs) can occur in all gender dyads.

7) If treatment that requires the patient to be sedated is used (like electroconvulsive therapy, or any procedure that requires anaesthesia), a nurse should be present during the induction and recovery of anaesthesia. This is good medical practice, not just a deterrent to sexual abuse.

8) Doctors are reminded that even a relationship with a former patient is discouraged and could be construed as unethical, as the previous professional relationship can influence the current relationship. There are serious difficulties in defining the time frame that should elapse after the doctor patient relationship is terminated, after which a doctor may consider having a sexual relationship with a patient (if existing laws of the Indian Penal Code are not broken). One difficulty is that the ending of ‘treatment’ does not signify the end of the ‘doctor patient relationship’ in view of multiple issues involved, including relapse rates of illnesses and individual vulnerabilities of patients. If, for whatever reason a doctor feels it imperative to have a romantic/ sexual relationship with a patient (and again, if this does not involve the breaking of any laws), then the doctor should ensure the patient’s care is ‘handed over’ properly to another doctor. It is extremely important that the doctor discuss the issue with at least one senior colleague to ensure that the doctor himself/herself is not entering a relationship due to his/her own vulnerabilities which need to be addressed and the former patient is clearly not being exploited. Till evidence suggesting otherwise be obtained, IPS puts the time frame as ‘one year at the very least, after termination of the doctor patient relationship’, with the emphasis on ‘at the very least’.

9) It is impractical to have a detailed list of do’s and don’ts regarding Non-Sexual Boundary Violations (NSBVs) as often it is the context which differentiates an acceptable boundary crossing from an unacceptable boundary violation. However, it would be useful to note that sometimes NSBVs can ‘slip into’ SBVs. It would be important for all doctors to be alert to warning signals in their own (or in their colleague’s), as well as patients’ behaviour in these situations.

10) Doctors are reminded to ensure that they use social media responsibly, as it can inadvertently lead to a blurring of professional boundaries.

12) Any failure to follow these Guidelines, if reported to the Indian Psychiatric Society (IPS) will be referred to the Ethics Committee. It is suggested that all allegations of SBV be taken up for initial enquiry by the Ethics Committee of the IPS. If considered appropriate, they will refer the case to the local “Internal Complaints Committee” (as required by the Supreme Court mandated law on Prevention of Sexual Harassment of Women in the Workplace (Prevention, Prohibition and Redressal Act 2013.) Though this law pertains to women at the workplace, many hospitals/ nursing homes have gender neutral policies which extends to patients too. If any criminal act is reported, then the appropriate process of enquiry by the police should be initiated. Doctors are reminded of their own ethical obligation to report unethical conduct by colleagues. (As listed in Section 1.7 of The Indian Medical Council (Professional conduct, Etiquette and Ethics) Regulations, 2002). Where children are involved, reporting is mandatory or risks imprisonment (Protection of Children from Sexual Offences Act, POCSO 2012).

13) Though these Guidelines pertains primarily to patients, doctors are reminded that similar care should be extended to interactions with students, colleagues and other professionals in the multidisciplinary team- indeed anyone who is in a ‘power imbalanced relationship’ with the doctor.

14) False allegations can occur. It is important for doctors to be alert to warning signals and risk situations. If the doctor finds him/ herself in the midst of an allegation (whether true or false), it would be important to reach out to colleagues for support. Members of the IPS should be available to support a colleague during any enquiry into an allegation. In the event of an allegation, support should not mean ‘covering up’ the issue. If the allegation proves true on enquiry, the colleague should be supported to the face the consequences of his or her behaviour. Steps should be taken to access help to try and ensure that the behaviour does not recur and patients are protected.

15) The Indian Psychiatric Society recognizes that SBVs are not restricted to any particular group of doctors, indeed not restricted to doctors alone, but occurs in all professional groups. In endorsing this Guidelines for Doctors on Sexual Boundaries, the Indian Psychiatric Society takes one step towards effective action against sexual abuse in our society.

The guidelines can be accessed here: https://pxmd.co/Gl0QN

Lakshay Chotiya
PlexusMD Editorial team
Lakshay Chotiya is an analyst at PlexusMD and is a part of the Editorial Team. He is a B.Tech graduate from Indian Institute of Information Technology, Vadodara. He likes learning new things and writing. When not working, he is either exploring new places, binge-watching, meeting new people or playing strategic games.
About PlexusMD Newsdesk
PlexusMD Newsdesk covers important news and developments that impact Doctors, students and healthcare organisations. We strive to bring you detailed and accurate analysis of important stories as they happen.
Dr. T●●●●z H●●●●●●i and 41 others like this40 shares
Like
Comment
Share
View more comments