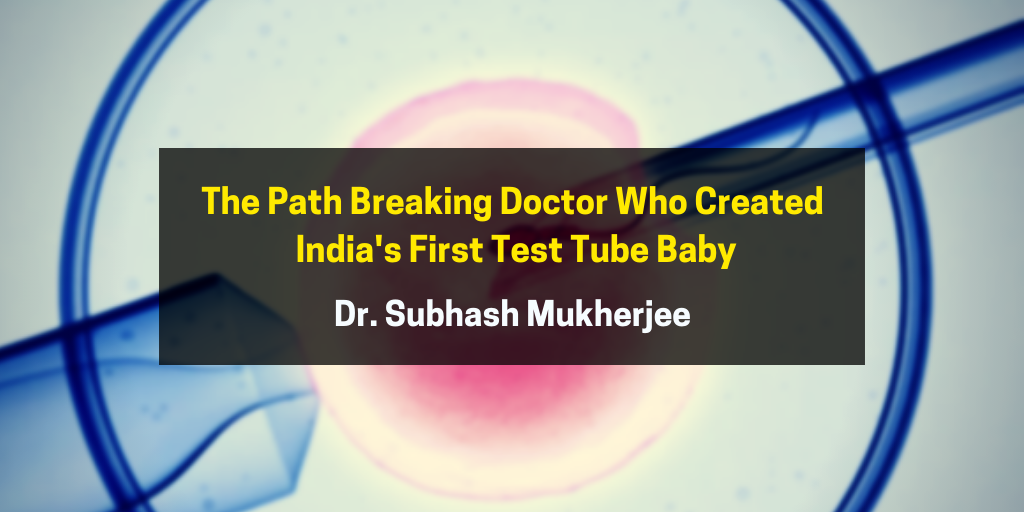 A story of discovery, dejection and acknowledgement

In-vitro fertilization, commonly referred to as IVF is an infertility procedure that has instilled a sense of hope and happiness to millions of parents who are ridiculed for unable to bear children. The technique is both accepted and respected in Indian society, where infertility is viewed more as a problem possessed by a particular gender.

Though IVF has spread infinite joy to couples globally but one doctor suffered the opposite. Humiliated and disgraced by community and authority, he was discovered and recognized long after, posthumously. Our blog is dedicated to Dr. Subhash Mukherjee, the pioneer of IVF in India and the story of his discovery by Dr. T. C. Anand Kumar. Dr. Subhash Mukherjee (Mukhopadhyay) was a physician from Hazaribagh who graduated from Calcutta National Medical College in 1955 and then attained double doctorate from University of Calcutta & Edinburgh University in reproductive physiology and endocrinology respectively.

He associated with Nil Ratan Sircar Medical College, Calcutta after his return from UK. His passion for the field of gynecology led to a collaboration with Cryobiologist, Dr. Sunit Mukherji & Gynecologist Dr. Saroj Bhattacharya while treating a patient with damaged fallopian tubes.

On October 3, 1978, Dr. Subhash and his team announced the birth of the India's first and world's second test tube baby in Calcutta, a baby girl nicknamed Durga. The feat was accomplished 67 days after the announcement of first test tube baby in the world – Louise Brown in England.

Dr. Subhash had not only discovered IVF in India but he created more than that. He successfully achieved cryopreservation in an eight-cell embryo using Dimethyl sulfoxide (DMSO) reagent. He was also the first to use human menopausal gonadotrophins (hMG) to stimulate ovaries to produce extra eggs.

Creation of first IVF baby in England was lauded in the medicine world globally. Unfortunately, Dr. Subhash and his team were awarded with criticism and dejection by authorities and medical community.

The then West Bengal government had set up an ‘expert’ committee to investigate his breakthrough on November 18, 1978. The committee concluded that his claims were ‘bogus', ‘fascination invention using basic apparatus & refrigerator’.

As a punishment of his straightforwardness and keeping his head high amidst the dejection, he was transferred to Regional Institute of Ophthalmology in 1981; hampering his further research on hormonal therapy.

Humiliated and dispirited with the entire event, Dr. Subhash committed suicide in his flat on June 19, 1981, hence vanishing in the history without a trace. Dr. T.C Anand Kumar with Dr. Indira Hinduja became pioneers of IVF in India by creating India's 'first IVF baby' named Harsha in India in 1987. Then, Dr. Kumar had no idea of the ‘first IVF baby’ created 8 years back by Dr. Subhash.

On his visit to National Science Congress held in the same year, he was hand over hand-written notes prepared by Dr. Subhash Mukherjee on IVF discovery by fellow discoverer Dr. Sunit Mukherji. After going through the notes, Dr. Kumar realized that the title he bore belonged to someone else!

The courageous decision of giving due credits to the late doctor made Dr.Kumar meet Durga’s parents who had vanished in daylight after the birth of Durga, fearing questions on the action taken & stigma of childless affixed on them. After his meticulous research and interaction with Durga's parents; Dr. Kumar delivered a speech at 3rd National Congress on Assisted Reproductive Technology held in Calcutta on February 8, 1997 where he made an appeal that Dr. Subhash should be credited posthumously for creating India’s first test-tube baby.

As former director of the Institution of Research in Reproduction at the Indian Council of Medical Research (ICMR), Dr. Kumar was also in a position to exonerate Dr. Subhash Mukherjee of the fraud charges.

Dr. Kumar followed up his appeal with the publication of an article in the journal Current Science entitled ‘Architect of India’s first test tube baby: Dr. Subhash Mukherjee.’

In 2002, Indian Council of Medical Research (ICMR) formally recognised the efforts of Dr. Subhash Mukherjee after all the evidences presented.

In 2007, the story of Dr. Subhash found place in Dictionary of Medical Biography published by Wellcome Trust Centre for the History of Medicine at University College London (UK).

Do you have something to say about the topic? Please share your views in the comment section below

Sabhyata Sharma
PlexusMD Editorial Team
Sabhyata Sharma is Sr. Associate at Plexus MD and is a part of the Editorial team. She has attained her Masters degree in Biotechnology from Amity University, Noida. An avid fan of reading, she likes to explore the uncharted territory or hopping towards a cafe for some sanity.
About PlexusMD Learning
PlexusMD Learning tracks 1000+ Journals, Health agencies and Medical associations worldwide and engages with senior medical professionals across specialties to discover and share the latest news and developments, guidelines and stories of interest.
D●●●●●j B●●i and 15 others like this7 shares
Like
Comment
Share

Dr. N●●●●a G●●●a Obstetrics and Gynaecology
Justice delayed, not denied ,but the price paid too late leads to irrepairable consequences.
Feb 9, 2019Like2